“¡Qué Sorpresa!” is the thirteenth episode of the fifth season of the American television comedy series 30 Rock, and the 93rd overall episode of the series. It was directed by John Riggi, and written by Matt Hubbard. The episode originally aired on the National Broadcasting Company network in the United States on February 3, 2011. Guest stars include Ken Howard, Vanessa Minnillo, Brian Williams, Richard Belzer, Ice-T, and Elizabeth Banks. In the episode, Jack Donaghy meets with Kabletown’s boss, Hank Hooper. Jack doesn’t like Hank’s tactics of being a friendly boss and, in order to impress him, steals Kenneth Parcell’s idea. Liz Lemon keeps Avery Jessup’s pregnancy from relentless reporter Carmen Chao. Meanwhile, Tracy Jordan and Jenna Maroney fight over a sweatshirt. According to Nielsen Media Research, “¡Qué Sorpresa!” was watched by 4.784 million viewers during its original broadcast and received a 2.4 rating/6 share among adults aged 18–49. 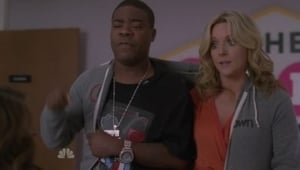