“Double-Edged Sword” is the fourteenth episode of the fifth season of the American television comedy series 30 Rock, and the 94th overall episode of the series. It was directed by Don Scardino, and written by Kay Cannon & Tom Ceraulo. The episode originally aired on the National Broadcasting Company network in the United States on February 10, 2011. Guest stars in this episode include Elizabeth Banks, John Cho, and Matt Damon. In this episode, Jack Donaghy heads to Toronto with his wife, Avery. When she goes into labor, they try their best to get back to the United States with the help of a meth smuggler, Lorne. Meanwhile, Liz Lemon boards a plane with her boyfriend, Carol, as the pilot. Things do not go well when the plane has not flown yet and Carol keeps telling them that they will leave “in about half an hour” several times. Elsewhere, Tracy Jordan deals with the pressure of having won an EGOT and the formal expectations that he has to meet. 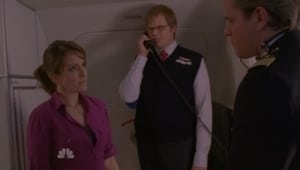