“Queen of Jordan” is the seventeenth episode of the fifth season of the American television comedy series 30 Rock, and the 97th overall episode of the series. It was written by Tracey Wigfield and directed by Ken Whittingham. The episode originally aired on the National Broadcasting Company network in the United States on March 17, 2011. The episode follows a reality show format, and often parallels the events of the Real Housewives franchise. Guest stars in this episode include Sherri Shepherd, Susan Sarandon and Tituss Burgess. This episode aired as an episode of Queen of Jordan, a fictional reality series that started sometime during the events of “Mrs. Donaghy”. In this episode, Jack Donaghy convinces Liz to convince Angie to convince Tracy to come back from Africa. Meanwhile, Frank is found by his lost love. Throughout the episode, Jack gets into embarrassing situations and Jenna tries to be the focus of the reality show’s cameras. This episode of 30 Rock received generally positive reviews from television critics. According to Nielsen Media Research, “Queen of Jordan” was watched by 4.192 million households during its original broadcast, and received a 1.7 rating/5 share among viewers in the 18–49 demographic. 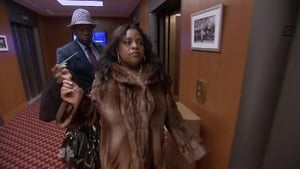